The vacancies have arisen due to the resignations of Cllrs Elizabeth Murray, Ivor Walker, Sandra Wright and Michael Key and their term of office would have ordinarily expired in May 2023.

This year, the consultation for the admission arrangements for 2023-2024 for all community and voluntary controlled schools in Nottinghamshire will be open between 4 October 2021 and 28 November 2021.

Please can you share information about the consultation widely within your church communities and other partner organisations who may have an interest in the proposed arrangements?  It is important that all consultees have an opportunity to comment on the proposed arrangements if they wish to do so.  A poster is attached which you may wish to include in any communication.

A summary of the consultation is attached and the full proposed arrangements are available on our public website https://www.nottinghamshire.gov.uk/education/school-admissions/admissions-consultation-2023-24

It is important that all consultees have an opportunity to comment on the proposed arrangements if they wish to do so, comments can be made up to 28 November 2021 by:

Thank you for your help.

The Parish Council has a duty of care to all residents and will take up their concerns with a view to resolving them.

There have recently been numerous complaints and posts on social media concerning dog fouling and the anti-social behaviour of a minority who do not pick up and dispose of their dog’s dirt.

This is an offence. Anyone caught not cleaning up after their dog can be fined up to £1,000.

Purpose-made 'poop-scoops'; to pick up your dog's mess are available to purchase and bags are also available. Special bins are provided in Elston for disposing of the mess and are routinely emptied. Otherwise, use a litter bin or your wheelie bin at home; first making sure that the material is securely wrapped.

This law applies to almost all areas in the open air to which the public have access. Dog Wardens, Police Community Support Officers and others are authorised to give offenders Fixed-Penalty Notices – an on-the-spot fine. Your Parish Council is responsible for locating dog bins. Please contact the Clerk to Elston Parish Council if you believe that a dog bin is required in your location

The district council is responsible for emptying the special dog bins. You can report any problems by contacting N&SDC customer services team on 01636 650000 or via email

Please be assured our only interest as a Parish Council in this matter is public safety and we will continue to assist residents who have concerns and approach us for help....... Download the document here

From Monday 2 March, TfL roads in central London will be changing their speed limit to 20mph.

This is to improve safety for all road users.

If someone is hit at 30mph, they're five times more likely to die than if they are hit at 20mph. This is part of the London Mayor's commitment to Vision Zero to ensure there are zero deaths and serious injuries on London's roads by 2041.

Elston Parish Council is in discussion with Notts. CC to introduce a 20mph statutory speed limit in Elston...... Download the document here

125 years ago, in December 1894, the first Elston Parish Council meeting was held in compliance with the Local Government Act of 1894.

The meeting was held in Elston School on 4 th December at 7.00pm. 7 councillors were elected by a show of hands and the elected Council followed with the
election of their first Chairman, Lewis Palmer.

One of their first resolutions was: ‘That the Chairman and the Clerk shall settle with the school managers the cost of fire and lighting in the School Room when used for Council Meetings’

Showing suspended during the pandemic

Have your say in the future of YOUR Community!

Back in 2004, Elston developed a plan for the village. This was based on what the residents and users of our facilities said was important to them or what was missing. As a result of the consultation our community shop was born!

There are a number of projects which residents have told us are important to them, for instance; saving the Chequers and developing the sports facilities. A parish plan will enable us to consult widely with the village and gather evidence to help inform future funding applications to develop and improve the village in a way that is important to you all.

We are hoping to set up a steering group in the New Year to move forwards with this.

Jenny Kirkwood who is supporting this process from Rural Community Action Nottinghamshire (RCAN) on 01623 727600 or email jkirkwood@rcan.org.uk 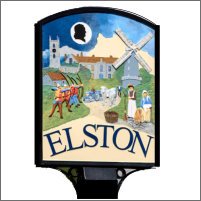 Eden Hall, situated close to Elston Village was originally known as Middleton House was built by a firm of London Contractors for Robert Middleton, Esq. and was completed in 1875.

As a youth and young man Robert Middleton was a student under the Rev. Henry Leonard Adams, Minister of the Newark Congregational Church, Lombard Street, from 1834 to 1850. The house was named Middleton House and Chapel, for although Robert Middleton had separated from the Newark Baptists about 1872 he included in the building of Middleton House a Chapel with Baptistry. The local newspaper described the building as ‘novel’ on an extensive scale’ and ‘an object of great interest to the entire district.

The Chapel occupied almost the whole of the central portion of the building and was entered from the Courtyard at the rear of the house. The large pulpit was just inside the entrance. Opposite the entrance was a self-acting organ with gilt pipes, which played up to 30 sacred tunes. There are two galleries and about 200 could be accommodated on the ground floor and in the galleries. For baptisms there was an iron tank sunk into the floor; this tank was reached by iron steps.

The furniture in all the rooms was of superior quality, some of the inlaid tables having belonged to suites of the late Emperor Napoleon III, who died in Kent in 1873. One of the rooms contained collections of china, which could be found in Dresden, Serves and Worcester. At the South end of the house was a large conservatory, which attracted considerable attention. It was 30 ft. high and 40ft. square with a fountain in the centre. A choice selection of tropical plants thrived within.

Then across the courtyard one found the ordinary stables, coach houses, out-houses and a lofty clock tower. The clock had four dials, each 5ft in diameter and could be illuminated at night. The hour was struck on a bell weighing 100 cwt, and Westminster chimes every quarter hour on smaller bells. There was also in the clock tower a carillon, which played a different tune for each day of the week. The tune was repeated every three hours.

The Conservatory, which once housed beautiful tropical plants at the South West end of Middleton House, was destroyed during World War II and occurred on the night of the 8th December, 1942. The bomb load of a Lancaster Bomber was accidentally released on to the ground beneath one of the aircraft at starting up time for an operational mission. The same explosion damaged windows in East Stoke Church and there were some reports of pots being shaken from shelves of houses in the locality. There were several casualties among the R.A.F personnel but full details are not available.

Today Eden Hall is a popular spa retreat and beauty centre you can visit their website here.

This website uses cookies to improve your experience while you navigate through the website. Out of these cookies, the cookies that are categorized as necessary are stored on your browser as they are essential for the working of basic functionalities of the website. We also use third-party cookies that help us analyze and understand how you use this website. These cookies will be stored in your browser only with your consent. You also have the option to opt-out of these cookies. But opting out of some of these cookies may have an effect on your browsing experience.
Necessary Always Enabled
Necessary cookies are absolutely essential for the website to function properly. This category only includes cookies that ensures basic functionalities and security features of the website. These cookies do not store any personal information.
Non-necessary
Any cookies that may not be particularly necessary for the website to function and is used specifically to collect user personal data via analytics, ads, other embedded contents are termed as non-necessary cookies. It is mandatory to procure user consent prior to running these cookies on your website.
SAVE & ACCEPT